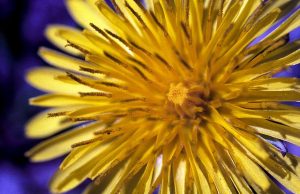 Before you know it, it will be Spring-- which is an amazing time of year! It also contains a simple ritual of mine that begins in the beginning of April and goes through until August-- harvesting dandelion greens!

Knife in one hand and colander in the other, there’s something cathartic about crawling around on hands and knees to harvest dandelion greens at their young and tender best. The best dandelion greens grow in the untraveled areas--away from pets and lawn mowers.

Everywhere else in the world-- spanning cultures and cuisines, the dandelion green has been celebrated throughout human history. However, in America, it’s been cast as The Worst Thing In The World. An estimated 80 million pounds of pesticides are purchased each year to kill dandelions in the American yard...but this doesn’t deter the little scrappy plant.

Every part of the dandelion is edible and has medicinal and culinary uses. The dandelion has long been administered as a liver tonic and diuretic.

The roots contain inulin and levulin-- starch-like substances that may help balance blood sugar. They also contain bitter taraxacin, which helps to stimulate digestion. The roots of the dandelion can be harvested during any time of year where there isn’t frost and can be eaten raw, steamed, dried, roasted and ground into a coffee substitute.

Dandelion greens are rich in potassium, antioxidants, and vitamins A and C. The greens can also be eaten raw… as well as steamed, boiled, sautéed or braised. To use in salads, dandelion greens should be harvested from younger plants while they’re still small and tender-- before the first flower emerges. Larger greens tend to be tougher and more bitter, which are better suited for cooking.

Grow Your Own Dandelion

Dandelions may be scrappy little yard warriors, but they don’t necessarily grow where or when you want them. If you fall in love with all of the wonderful benefits from dandelions, you can take the guesswork out of it by planting your own. Here are some varieties that you will love!

Clio- An Italian dandelion that produces high yields of upright greens that are easy to harvest.

Ameliore- a cultivated French strain of the common dandelion with broader leaves and a milder flavor than its outlaw cousin.

Milano Chicory Melange- This fantastic salad mix contains dandelion-like ‘catalogna’ seeds that are in a colorful mix of chicories.