Macadamia nuts are some of the most expensive nuts in the world because of their nutritional value and intensive but rewarding cultivation process.

They are native of Australia and can now be found growing in other tropical parts of the world such as Brazil, Hawaii (that's us!), and New Zealand.

Native bushmen from remote areas in Queensland, Australia, on the eastern coastal forests near Brisbane, are said to have eaten them prior to the founding of the European settlements. 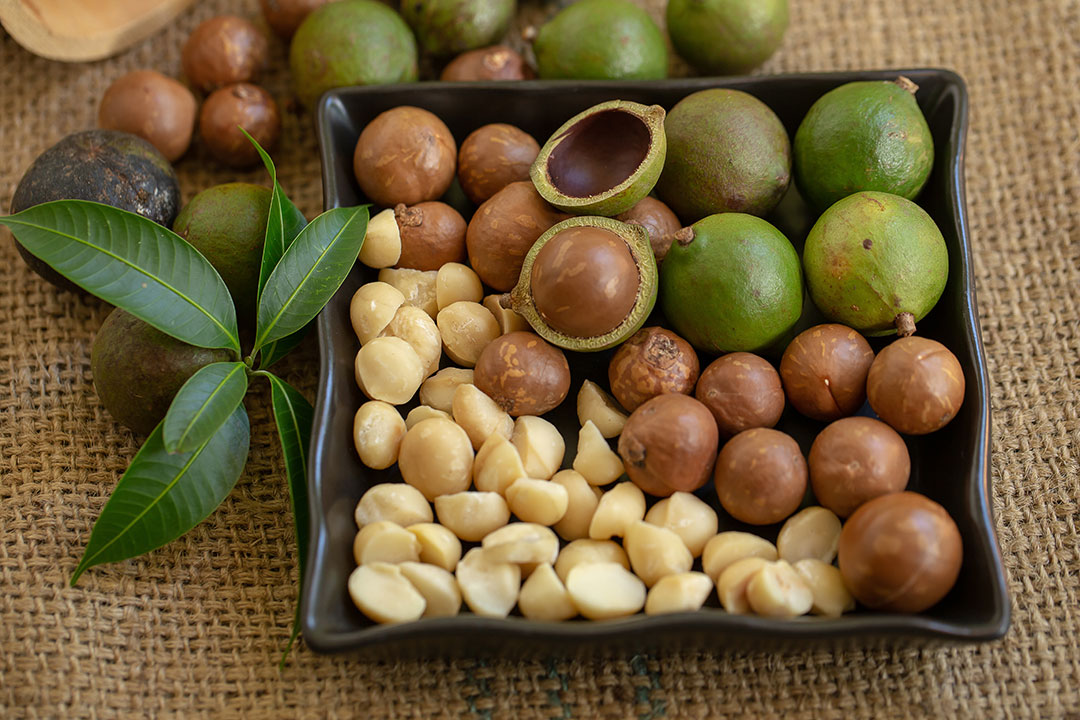 The first specimens were casually collected by botanists in the mid-1800s, and the name was given in honor of a respected Scottish-born man named Dr. John Macadam, who was a doctor, scientist, and philosopher who became the first secretary of the Royal Society of Victoria. 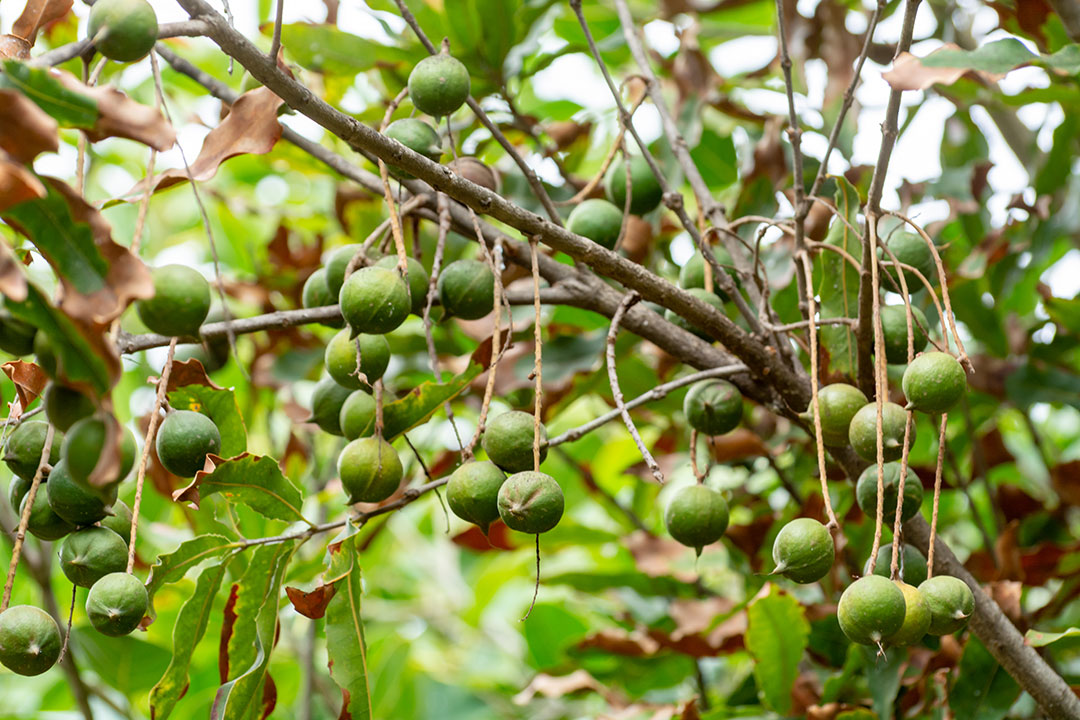 The first successful agricultural ventures actually took place in Hawaii, and when a commercially viable production model was created the cultivation of these nuts eventually returned to Australia in the 1960s.

Today, both Hawaii and Australia are the largest producers in the world.

These popular nuts have a smooth, sweet, buttery taste and are rich in nutrients, healthy fats, vitamins and minerals.

Their agreeable flavor profile make them popular treats that go well with desserts and baked goods, especially with chocolate.

The Medicinal-Foods.com Chocolate Covered Macadamia Nuts are a perfect example of a delectable and healthy snack coated with raw Arriba cacao powder and a special blend of powdered superfoods including Lucuma, Spirulina (blue-green algae), Ashwagandha root powder, and pure Chlorella.

They source their Macadamias from Hawaii, and several studies have been shown to be high in Thiamine (an energy boosting neurotransmitter) and Omega 3 and 6 fatty acids.

Eating these nuts has shown to reduce a variety of metabolic symptoms such as high blood sugar, high cholesterol, and type 2 diabetes.

Because of their high levels of monosaturated fats they also help in reducing excessive appetite and hunger while supporting weight loss.

What are macadamia nuts?

So what are they and how are they cultivated? There are 4 base genus types of Macadamia trees originally native to Australia, two of which produce edible fruits: Macadamia integrifolia and Macadamia tetraphylla.

The more commonly cultivated is M. tetraphylia and grows to about 18 meters in height with long narrow leaves, pinkish/purple flowers, and round and hard green fruits about 3 centimeters in diameter.

The fruits have a hard green outer husk, which is cut open to the brown shell. After being dried this brown shell is broken open revealing the edible seed inside.

Macadamia trees prefer deep, moist, fertile and well-drained soils and thrive in tropical regions with consistent rainfall and humidity. They have been shown to grow better in areas at least 10 degrees from the equator.

M. tetraphylia and hybrid Macadamia trees do not sprout fruits “true” from seed, meaning that a pollination process is required for the tree to yield.

This can take between 5 and 10 years and this laborious process is one reason why they are the most expensive nuts in the world. When mature, the tree can produce 30 to 50 pounds of nuts per year and stand around 40 feet tall.

When they are young, the trees need a lot of water, consistently drained soil, and do best with many active pollinators nearby, such as bees.

While they can be resistant to light frosts, they must be carefully observed and protected in the first 5 years of cultivation to ensure a potential yield.

Where do macadamia nuts come from?

The first man to collect specimens was a Prussian explorer named Friedrich Wilhelm Ludwig Leichhardt who travelled to Sydney in 1842 to avoid being drafted into the military.

Although his was unable to secure a job at the botanical gardens, his explorations of the coastal regions and northern territories were important for discovering new potential settlements, and today he is mentioned in Australian history books for these contributions.

He made several voyages through forested lands and survived on the sustenance he found.

After one of his trips he deposited the first Macadamia specimen, without any details, at the herbarium in the Melbourne botanical garden.

The date of his death is unknown, and may be been killed by the bushmen or suffered a mutiny at the hands of his own men. 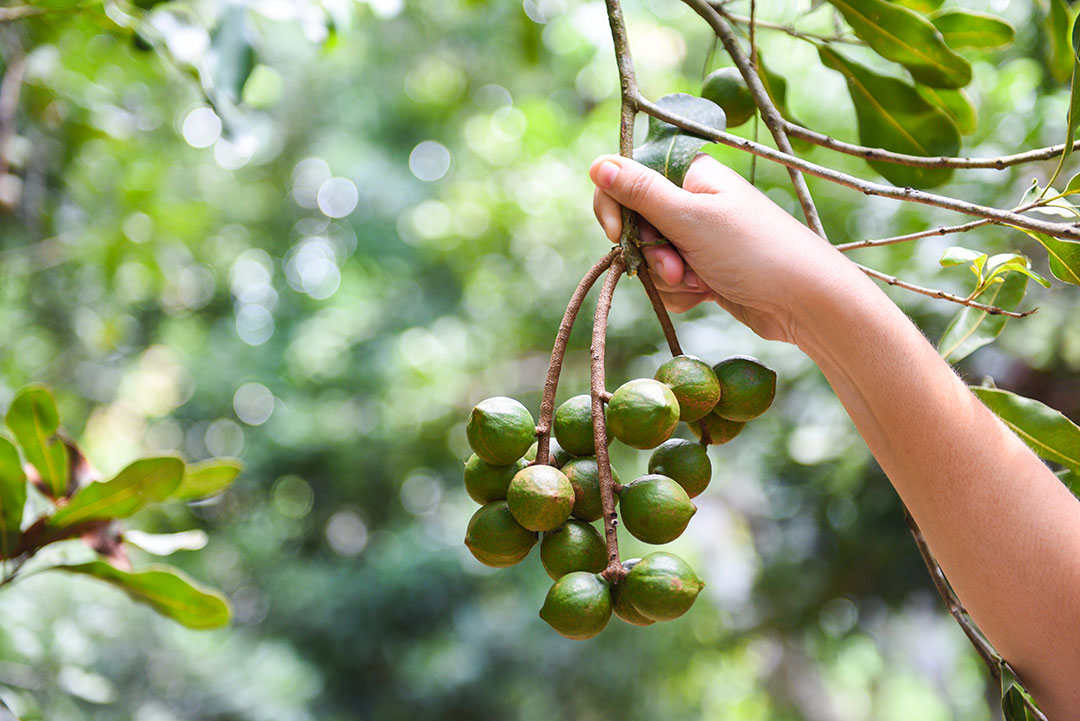 Baron Sir Ferdinand Jakob Heinrich von Mueller was the second person to register the Macadamia in 1857, and named it after his friend Dr. John Macadam.

Not until 1881 did the harvesting of Macadamias really begin to take root in the state of Hawaii.

Experiments were undertaken at plantations into the early 1900s, and in 1922 the first large scale plantation near Honolulu was leased from the government by Ernest Sheldon Van Tassel.

These early plantations had mixed success because of the lack of pollination, irrigation and harvesting information about these high-maintenance trees. 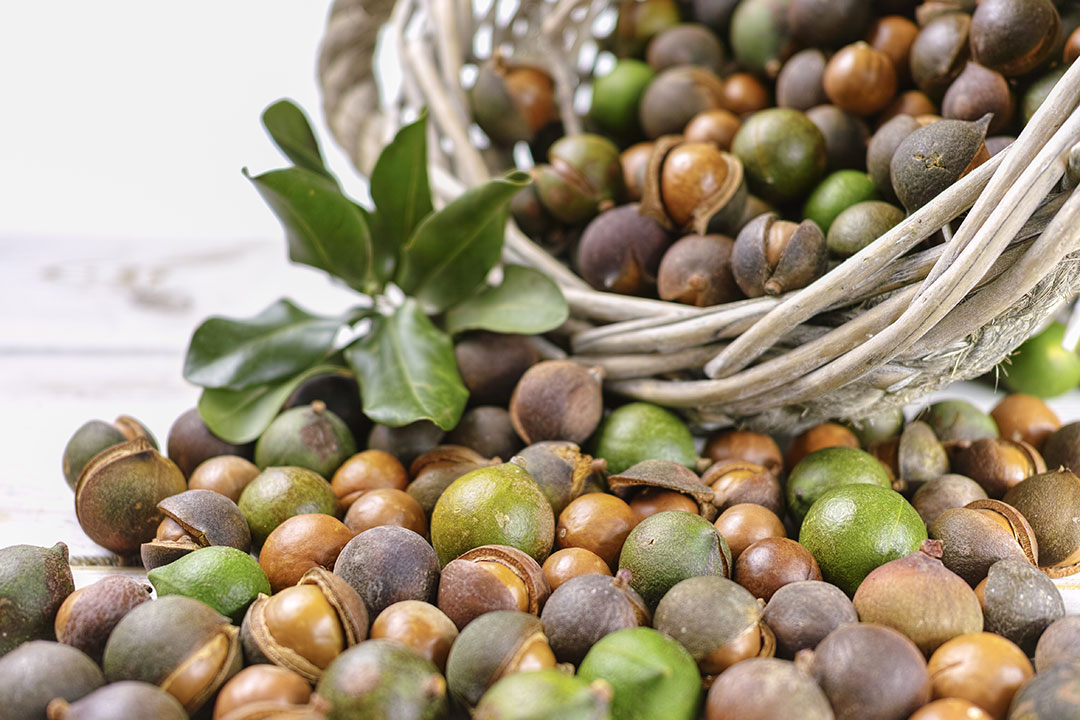 The U.S. Department of Agriculture became involved in the early stages, and it wasn’t until 1937 when proper characteristics of optimal growing conditions were discovered in orchards originally owned by Van Tassel’s Hawaiian Macadamia Nut Company, which had 60,000 trees on over 800 acres.

The largest scale plantations were established in 1948 by Castle & Cooke, Ltd, which eventually became Royal Hawaiian, on the island of Keaau.

High production volume in Hawaii continues until today, although Australia would eventually surpass in Hawaii in total volume in 1997. 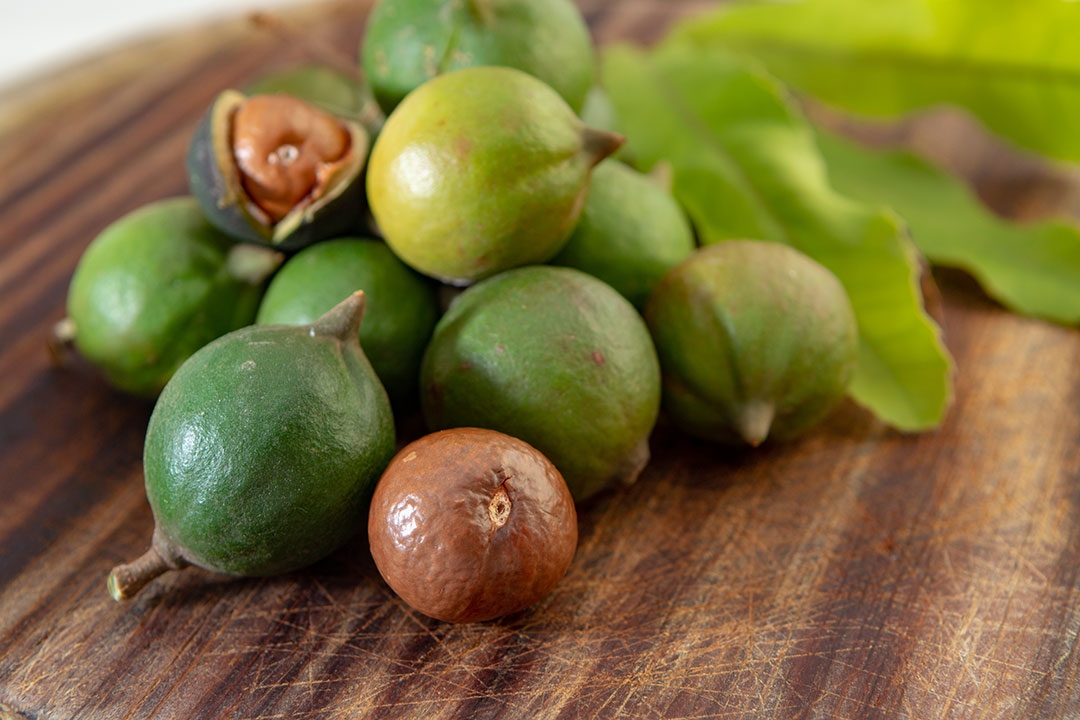 So what does a macadamia nut look like and can they be eaten directly from the tree?

Because of the cross-pollination process necessary for the fertilization of Macadamia trees there are now several hybrid varieties with variations of the fruit size, hardness and taste. 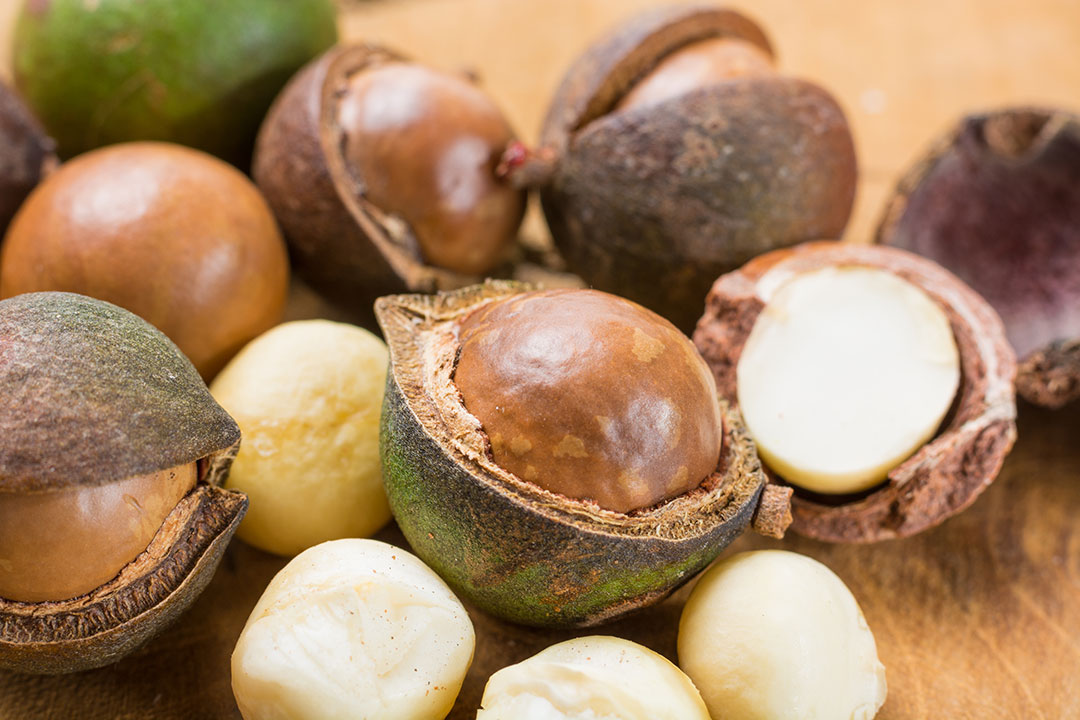 And not all blossoms on the trees will produce fruits.

Once the green fruit is ripe on the tree they either fall on their own accord or can be cut off. The green husk needs to be removed, and inside is a brown shell with an edible kernel.

The brown shells are usually air dried for two to three weeks and then a vise, hammer or a special tool is used to crack it open to get to the kernel.

The dried kernels are then put into a food dehydrator or in the oven at 100 degrees, increasing to 140 degrees, for two days.

After this step the nuts are crisp enough to be eaten directly (they are tan in color and appear like a small butterball). They are commonly roasted at 275 degrees, or stored in airtight jars for future use.