Cilantro is one of those amazing herbs that you can do virtually anything with. It goes splendidly in many dishes-- especially in Mexican cooking. The leaves are almost calorie free and its more of an aromatic-- best used raw or as a finish in cooking to maintain the flavor and texture. Great in salsa, cilantro is often known in the UK as coriander. It comes from the plant, coriandrum sativum, the Spanish translation is Cilantro...and that is the more common term used in the United States. You can also find cilantro referred to as ‘Chinese parsley.’ We’ll be talking about the health benefits of the leaves of the Coriandrum plant.

At Medicinal-Foods, we advocate eating plant-based foods of all kinds because of their association with a reduced risk of many chronic illnesses that are brought about by lifestyle-related choices. There are several studies advocating that plant-based diets containing foods like cilantro decrease the risk for obesity, overall premature mortality, diabetes and heart disease as well as promoting healthy skin and hair, an increase in energy, and overall lower weight. 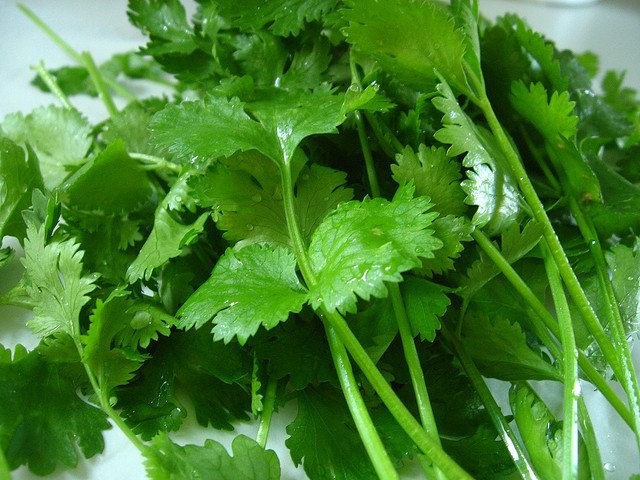 Cilantro acts as a natural preservative due to the high content of antioxidants in the plant. The oils that can be extracted from the leaves have shown to be inhibitive towards unwanted oxidation processes when added to other foods-- delaying spoilage. It’s also shown to have antibacterial properties against Salmonella

Water purification processes are top of mind for those who spend a lot of time outdoors. The next time you’re camping or hiking and are faced with questionable drinking water, consider adding cilantro! There is research showing that cilantro leaves can be a cost effective, simple way to filter water...especially in third world regions where access to clean water can be difficult.

The research was done on various samples of plants and concluded that cilantro is the most powerful bio-absorbant material in the Tule Valley (Mexico City)-- a region where water has extreme lead and nickel contamination. The cilantro was replaced by a charcoal filtration system-- far less cost efficient for poverty stricken regions.

Typically, cilantro can be just put directly into public water filtration systems from the ground up-- water is passed through and the cilantro removes any heavy metals. This results in cleaner drinking water.  Also, dried cilantro can be used in place of tea bags in a pitcher of water. Allow to steep for a few minutes and it absorbs the heavy metals.

It requires minimal processing to prepare for filtration and really is just a matter of drying out the herb in the sun for a couple of days. It grows locally in a vast amount of regions and has been proven effective as a filtration system in areas with questionable drinking water.

It really isn’t considered an essential crop in most places, so using it as a purifier won’t affect cultural nutritional needs. It’s easy to grow and manage, so it is again an effective addition in the battle for access to clean drinking water.

Cilantro's ability to detox heavy metals goes beyond its use in water. Ingesting as little as 1/4 cup of cilantro daily can have a powerful effect on detoxing your body.  Use caution, however, if your body is high in heavy metals, you may experience a powerful detox if you overdo it with cilantro!