There is a dirty side to clean eating. Here is what you should know so you’re able to remain healthy throughout the dietary changes you’re making. It’s important to understand that it’s not helpful to follow any diet extreme especially when it has the potential to hurt you.

Even though foods may seem to be good for you, they’re often not! Take almonds for example. The ones sold in the United States have been fumigated with a chemical known as propylene oxide. The CDC admits that it causes cancer. 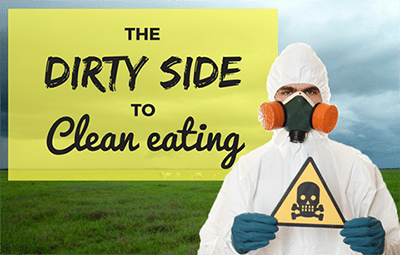 Knowing this, how good do you feel about buying and eating almonds? Would you opt to eating something in place of them? How do you feel about sourcing them from a completely different location than the grocery store? Medicinal Foods offers pesticide-free, organic versions of superfoods such as sprouted almonds for you to buy.

The Raw Truth with Raw Almonds

So the foods that you’ve grown used to eating and thinking that you’re benefitting from are actually causing you harm. In 2007, raw almonds were not allowed to be sold in the United States. A large grower had an issue with Salmonella and the California Department of Health Services stepped in to help. Nothing else was said about it until a second outbreak of Salmonella occurred.

The baffling part of this is that almonds must be treated to heat of 200 degrees to reduce Salmonella. It also could be taken care of by inserting kernels into a closed chamber which is fumigated with propylene oxide gas. Many almond growers lost their source of revenue because of this.

People simply did not want to buy almonds because they were afraid of getting sick. The problem wasn’t with the nuts themselves but the way they were treated. That’s why it’s important to know where your food comes from and the steps that it went through to get to you. Otherwise, you may get an inferior product or one that poses serious threats to your health.

So, most of the almonds being sold today in the States no longer have the life enhancing properties they once did before this issue. That is, of course, with the exception of our Chocolate Covered Almonds, Organic & Sprouted. They are pesticide free and sprouted so you’re able to get the most nutritional value from them.

Sprouted almonds offer the most nutritional value. They’re rich in protein, omega-3 fatty acids, fiber, vitamins B and E. Sprouted nuts are sounder purchases than raw nuts because it releases their enzyme inhibitors. That means you get more of the good stuff with every almond that you eat.

Medicinal Foods offers raw, organic, vegan, gluten-free, non-GMO products that are better for you and the planet. You’ll find a variety of products including the almonds that you love so much with their full nutritional value. We are the ancient future of food because we make food our medicine.