Mushroom supplements have been gaining popularity in recent years. The use of medicinal mushrooms dates back to ancient Chinese medical books and Tibetan medicine from thousands of years ago.

Although they have been used for medicinal purposes for so long, their use is only now becoming popular by us in the West.

Those that are commonly found in the supermarket (such as portobello, shiitake, shimeji, white and button) fall into the same category. They belong to fungi kingdom, but for culinary purposes they are classified as vegetables. These are known as culinary fungi. 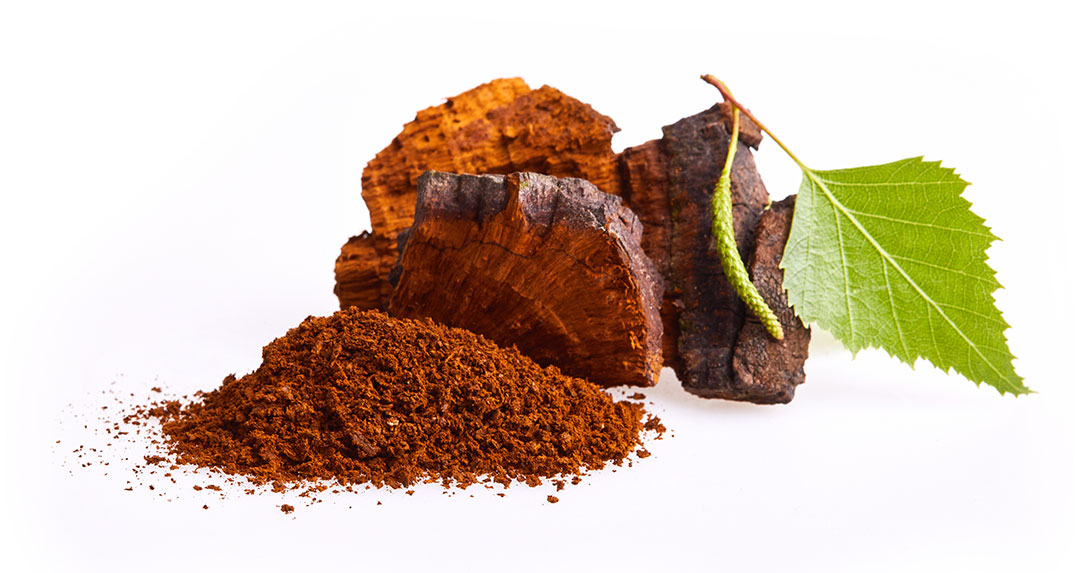 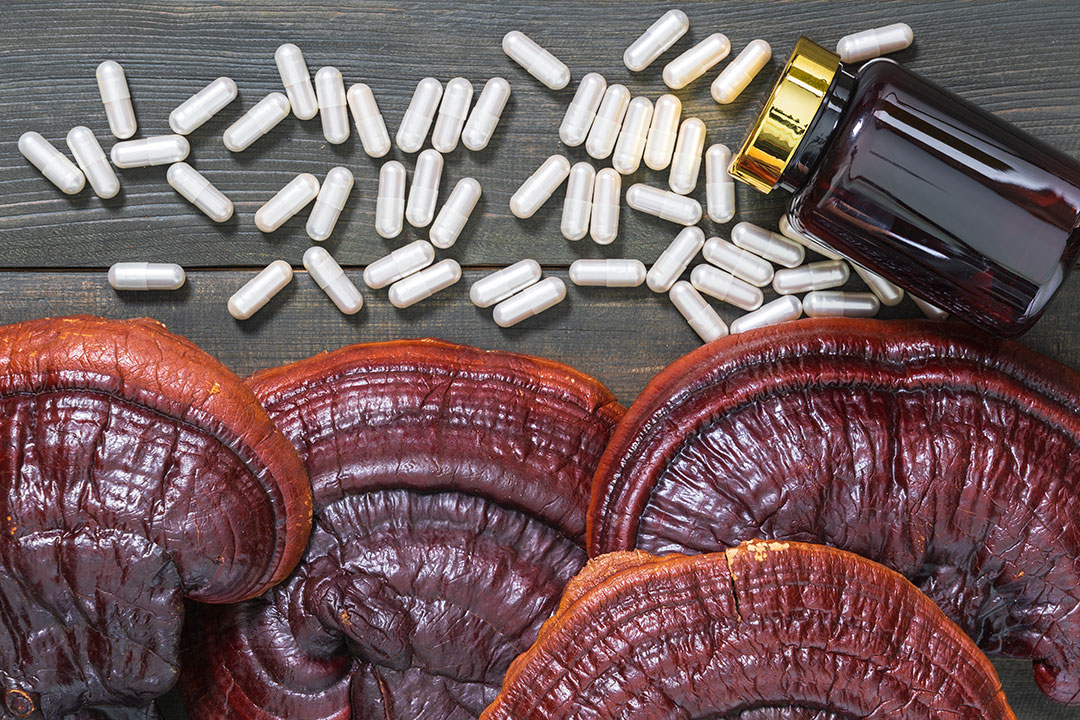 Scientists believe that fungi have been inhabiting Earth for about one billion years, and are everywhere. Fungi plays an important part in our digestive system and is essential for keeping a healthy body.

Consuming them provides the body with a great source of fiber, vitamins and minerals. One of the most notable nutritional benefits is the number of antioxidants and soluble fiber beta-glucans, which are shown to improve heart health.

Good supplements come in handy as a practical solution when it is not possible to consume vegetables, or if culinary fungi don’t present the kind of nutrients you need to supplement. They are made by drying raw ones and extracting with hot water. After that, they are ground into a fine powder, like the products we see in stores.

When purchasing these supplements, it is important to note that they are not regulated by the US Food and Drug Administration, so only buy from reputable sources as the Medicinal Food store.

When making supplements various edible fungi can be used based on the medicinal properties they exhibit. Most often used in supplements are reishi, lion's mane, chaga, cordyceps, and turkey tail. 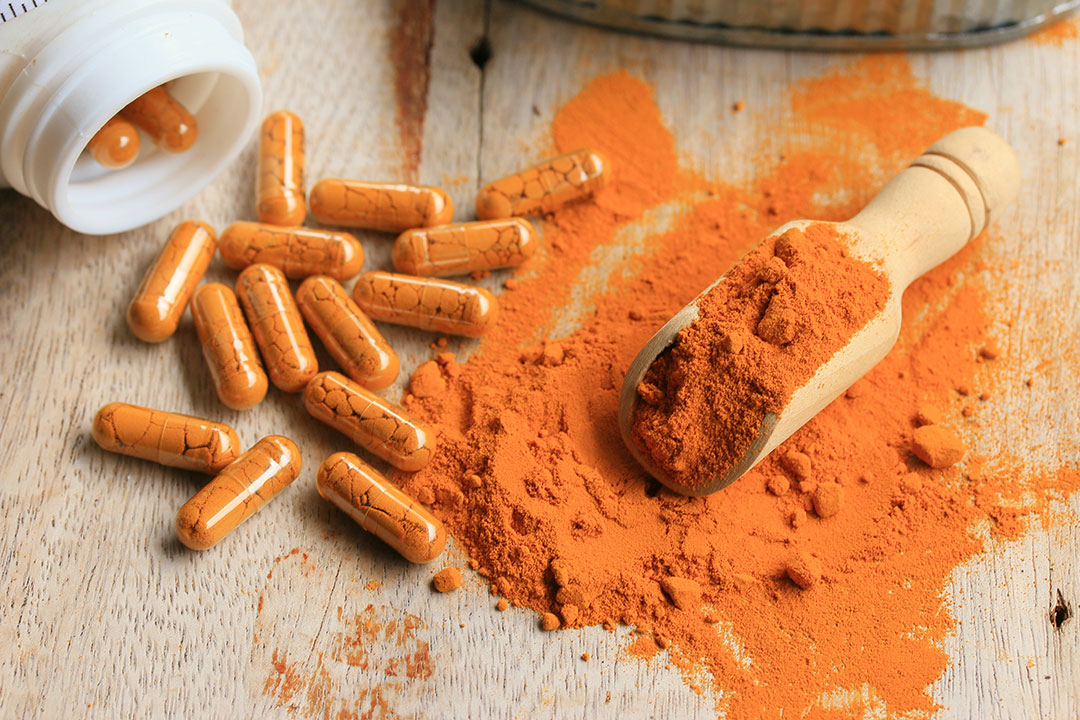 Due to the number of varieties available, it can be difficult to differentiate which ones have functional properties and when to use them.

Reishi are scientifically known as Ganoderma lucidum and can also be called lingzhi. In Chinese, the word lingzhi symbolizes divine power and longevity. So, this variety of is believed to be related to longevity. Reishi taste bitter and have a stiff texture. They can be found growing on deciduous trees.

These are most commonly used to boost the immune system and possibly help fight free radicals in the body. The beta-glucans in reishi are believed to stimulate the immune system. What makes this one unique is the calming properties of triterpenes that can improve mood, reduce anxiety, alleviate depression, and even improve sleep.

You can add Reishi Mushroom Powder Organic Maximum Potency, commonly known as the “King of Mushrooms”, to your favorite recipes; sprinkle it on soups, salads, hot cereals, or even ice cream; make superfood smoothies, tea and more.

Lion's mane are among the funniest looking kinds. They are large, white fungi with many white spikes that look like a lion's mane. They typically grow on dead and rotting wood or can be grown on substrates at home.

Mental clarity is one of its most attractive effects. Some studies have shown that lion's mane has compounds that can stimulate the growth of brain cells. This may help not only with memory, but also with emotional issues, anxiety, and depression.

Chaga is often found on birch trees in cooler climates. Although chaga looks like a burnt part of the tree bark, they do have functional properties. Traditionally, chaga was ground and used in herbal teas but now it can be found in other forms as a supplement.

Chaga has been shown to reduce inflammation and oxidative stress in the body, which may help reduce your physical signs of aging.

Before trying chaga, you should talk to your doctor or nutritionist. Unlike other varieties, chaga has a protein that can interfere with blood clotting. Chaga are also rich in oxalates, and they have been shown to increase the chance of getting kidney stones.

When buying Chaga Powder, you will be able to check other properties of this king of high antioxidants.

The trukey tail mushroom was named like this because it resembles a turkey's tail and is brightly colored. It can be found growing on tree trunks in forested areas.

Turkey tail is most popular because of its immune-boosting and antioxidant properties and because it may have compounds that can stimulate and strengthen the immune system. 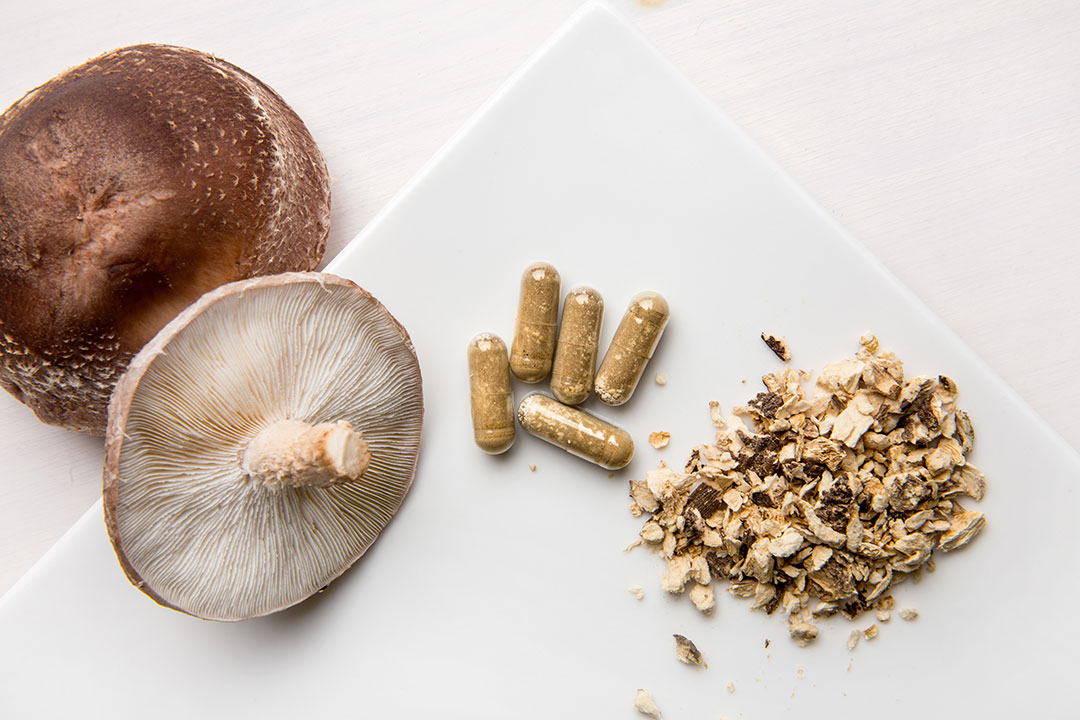 Cordyceps spans over 400 species, but two types are most often researched and used as supplements. The most common use for them is in increasing energy, as they increase the production of a molecule that helps bring energy to the muscles.

Traditionally cordyceps has been used to reduce fatigue and improve strength and sexual desire. Like many other functional ones, it can also slow down aging.

The processing method can extract higher or lower potency powders, depending on the way it is done. So, you should make sure that you buy a reliable brand as for Cordyceps Powder that guarantees you will have a high potency product. 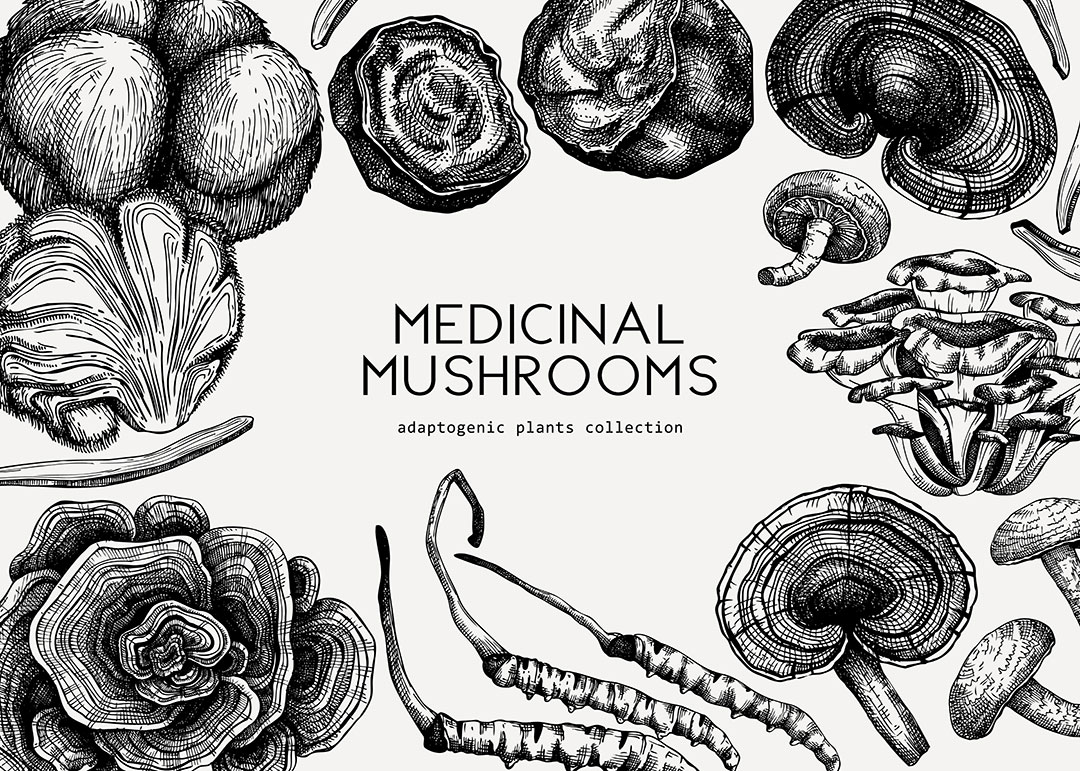 Mushroom coffee is one of the most common ways to make traditional supplementation, making it a great herbal alternative to coffee. Often comes in packages that contain the extract and an instant coffee.

Each package is added to hot water and mixed. The same process occurs for hot tea, with the medium and medium packet being added to the water. 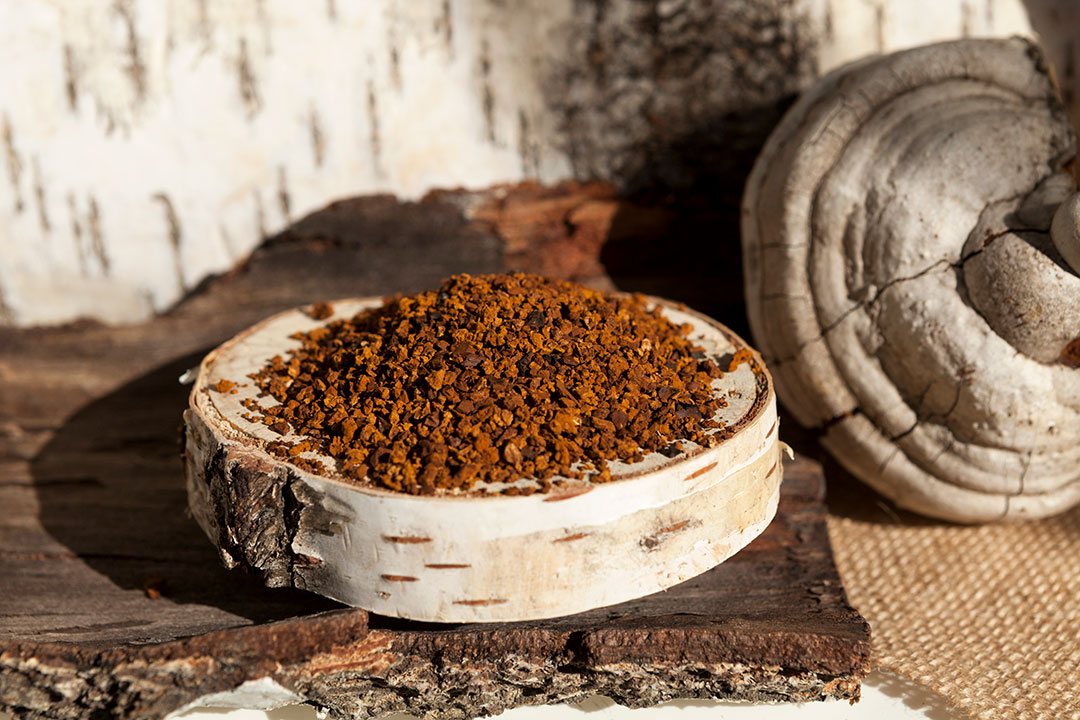 Breakfast with black kitchen mushrooms, which is just regular coffee mixed with one or more functional extracts. The ones used are the unextracted ones to replace the components with the coffees and then they are mixed with the conventional coffee.

Most of the time, mushroom coffee has less caffeine than traditional coffee, which can be more beneficial for users. Same sugar with mushroom coffee, the same ideas of limiting the amount of creamers and other coffee additives apply. 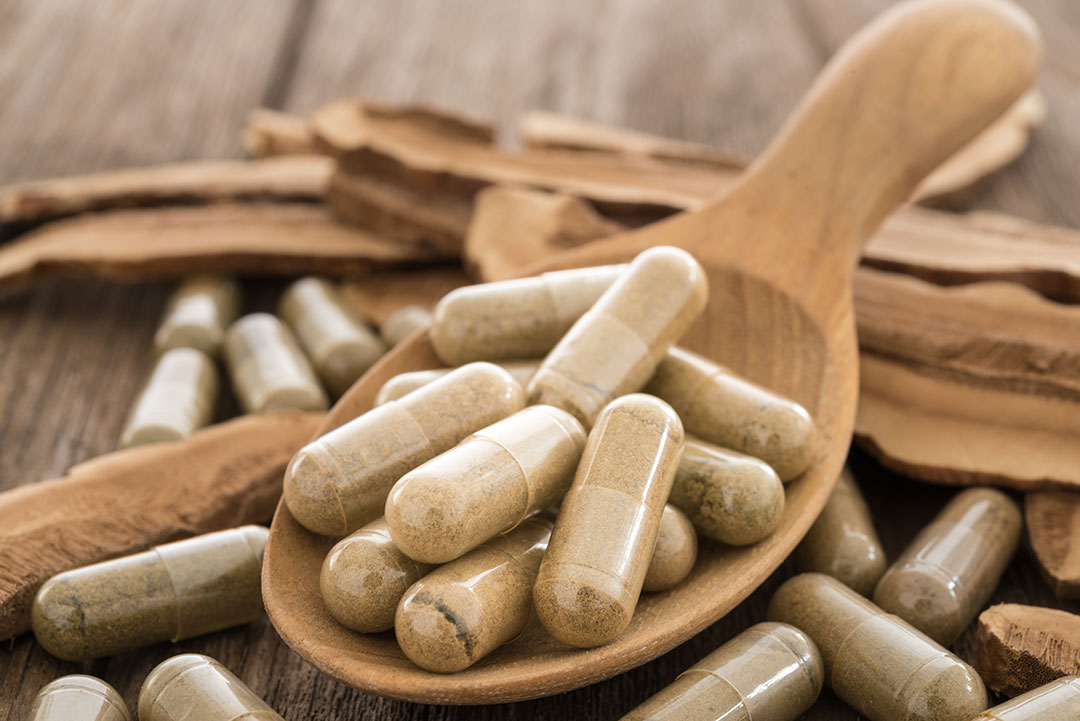 These supplements can be used in cooking are grown and produced in the same way as those found in supplements. The difference is that the fungi used in supplements are believed to have more health benefits.

These benefits classify them as functional foods, meaning they provide more than just nutritional benefits. More than 100 medicinal functions are produced by them.

The main benefits of these supplements are their antioxidant properties, cardiovascular protection, antibacterial and anti-inflammatory properties. Clinical research on the health benefits are limited, and more research is needed. However, we know that consuming them is usually safe and not harmful to health in general.

You may also often hear the term adaptogens related to these products. Adaptogens are herbs and fungi that help fight the stress your body goes through.

The adrenal and pituitary glands are involved in the stress response and adaptogens may help regulate the body's stable balance. Adaptogens are another functional benefit for supplementation.

When adding any type of supplement to your diet, try adding one variety at a time so that you are able to track whatever benefit you have.

Remember that before starting a new supplement, including fungi, consult a healthcare professional to ensure safety, especially if you have any pre-existing conditions.