I learned to distrust doctors early on. After being told I would have to be on their Asthma medication for the rest of my life (since I wasn’t outgrowing it) I looked the doc in his eyes and told him he was wrong. 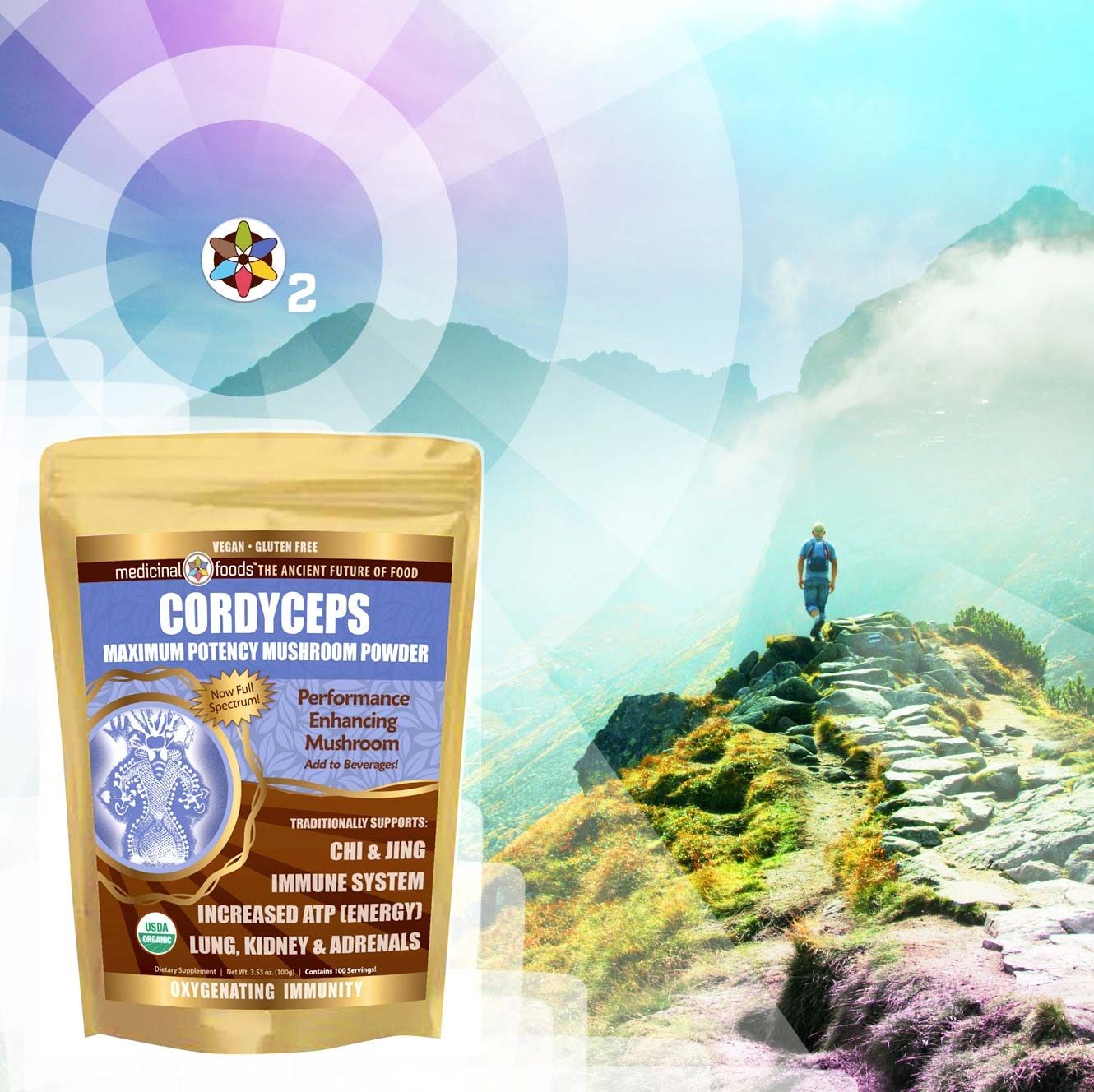 I was determined to free myself from their inhalers and medication which would give my lung symptoms temporary relief, only to shut them down even tighter. I felt hopeless at times. I began to turn to nature’s herbs and alternatives such as Ginger Root to dry up the mucous.

I was in and out of ER at hospitals, struggling for my breath for so long. Although I may be alive today because of western medicine, having double pneumonia at six months old, I hated the way the drugs made me feel.

I was amped out of my gourd and wanted to pass out from exhaustion and adrenal fatigue at the same time. Yet I was an athlete. Sometimes at the end of ski races or when I was really sick I thought I was going to die. I remember thinking, “It’s okay, I had a good life.”

While a common cold would last some people a week, for me it could be easily a month or more. My lung infections, coughing, mucous and inflammation was chronic. I wish I had Cordyceps shrooms for my lung, kidney and adrenal health then.

Since, I have traded my inhaler for this this magical mushroom which boosts ATP (energy) by up to 35% and is incredible at oxygenating the body. This is important especially in advance lung illness where the mucous gets ropey and smothers the alveoli at the ends of the lung tissue, inhibiting oxygen exchange. These are just some of the many medicinal mushroom benefits.

Medicinal Foods shrooms are the only ones in the world grown in a lab at low temperature and low oxygen to simulate the Tibetan Highlands where the wild version is currently overharvested. This strain was picked out of 400 different strains to be the highest in cordyceptin.

We can say it treats cancer in people’s beloved pets but not allowed to say so for humans. It’s such a powerful lung and adrenal tonic and is so oxygenating that it helped me go from tight inflamed mucus-filled lungs to being able to free dive and spearfish over 100 feet- on one breath.

I highly suggest it as a crucial part of anyone’s immunity building apothecary. The immune-building polysaccharides and beta glucan levels are off the charts in this mushroom!

NOTE: this is just a piece of my wellness puzzle and nothing can substitute for a full lifestyle transformation which is often needed when dealing with chronic illness.

Used in TCM to treat deficient Yin and Yang of the kidneys, as well as infertility, night sweats, dry lungs, chronic cough and fatigue.

A powerful lung and kidney tonic and has been shown to improve lung function and symptoms of chronic bronchitis. In 1993 two chinese athletes broke world records in swimming and won six of nine track meets, attributing much of their success.

For a fraction of the cost of Wild C. Sinensis, you can now get Cultivated, Organic, Non-GMO, Gluten-Free Cordy-Sinensis with 95% of the substrate removed and hot steam activated to make more bioavailable!

Definitely worth having on hand if you get any type of respiratory issues!

Did you know it gets its name from Greek and Latin words meaning "club" and "head", most of which are abundant in tropical climates.

The fungus parasitizes insects and occasionally other fungi in order to propagate and has a long history of use in traditional Tibetan and Chinese healing modalities and is traditionally used in Tibetan medicine as a tonic to improve energy and endurance, cordyceps supports immune health and its defenses to help you stay feeling your best.

The wild form is rare and expensive; consequently, a strain isolated from the wild form is now cultivated and commonly used. The type offered is medicinal and is a food traditionally prepared in Chinese medicine as a broth, it can also be used as an extract, as a tea, or in capsules. Medicinal foods Full Spectrum source below contains the spore, fruiting body, mycelium and primordia. It's also hot steam activated and one of the highest potency cordy available.

We recommend that you consult with a qualified healthcare practitioner before using herbal products, particularly if you are pregnant, nursing, or on any medications. Here's one of the best sources you can find...

*This statement has not been evaluated by the Food and Drug Administration. This product is not intended to diagnose, treat, cure, or prevent any disease. For educational purposes only. 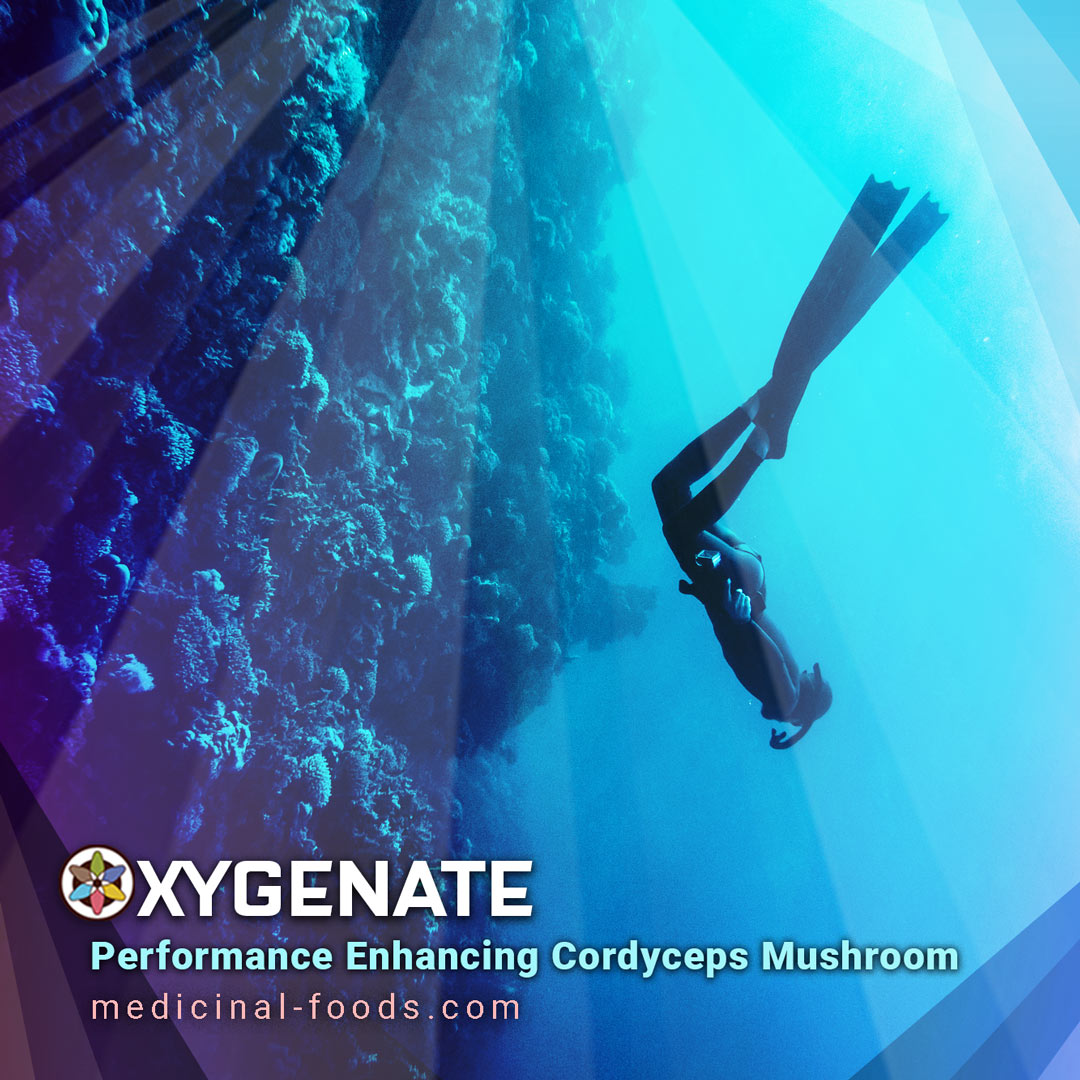 Add to waffles, toast or pancakes! 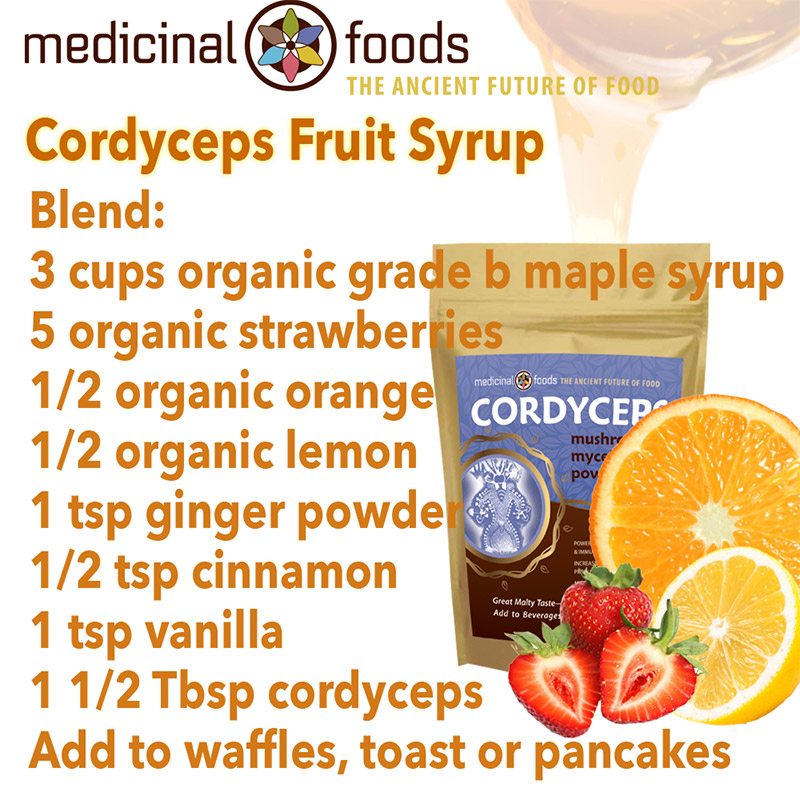 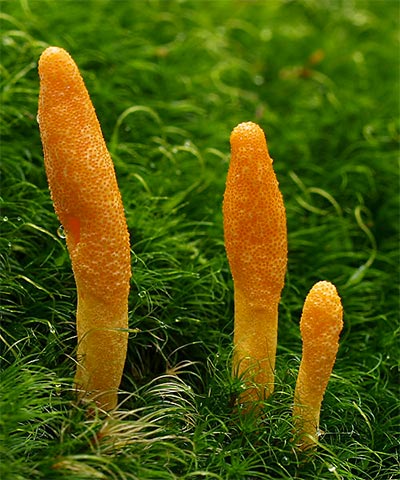 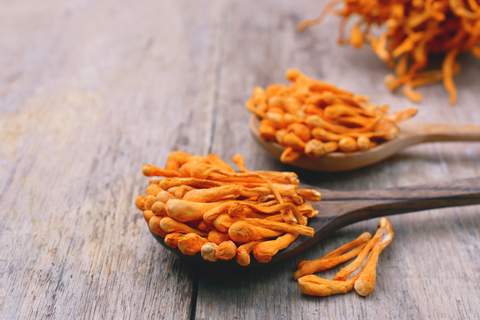