Reishi Mushroom benefits are innumerable! This amazing medicinal mushroom, may help you on your journey towards optimum health and wellness.

It has several benefits and works on many areas of the body, including the immune and respiratory system, liver detoxification, protective antioxidant, and more.

It can boost your overall health, helping you feel your best!

Let’s go over some of the awesome benefits...

Amazing immune system booster!
It significantly improves the functioning of the immune system-- whether your immune system is deficient or excessive, it's is a superb immune modulator. It contains unique, rare polysaccharides-- proven to increase the RNA and DNA in bone marrow...which is where the body makes B cells. Studies have shown that it may promote both B and T cell production. These are specialized cells that are a critical part of your immune system.

One of the most studied herbs there is, there is much research around how it may help regenerate the liver. The powerful compounds that are contained in the Full Spectrum products help accelerate the clearance of drugs and chemicals that the liver stores-- relieving free radical activity and promoting cell regeneration. This powerful mushroom helps to promote the production of bile and fatty acid synthesis...which promotes faster detoxification of the liver.

This magical shroom contains a special compound, gandosterone, which has strong anti-hepatotoxic activity and promotes rapid cell recovery. This is particularly useful for people battling chronic hepatitis-- a disease that slowly erodes people’s health and often leads to premature death.

Ganoderma has been approved for treatment with some kinds of cancer in Japan and has been used safely and effectively as treatment for those cancers for awhile.

Often used in conjunction with other drugs or radiation, it’s been demonstrated that it may help reduce side effects of radiation therapy and simultaneously contributes to the rebuilding the immune system.

Well known for its calming and mood-boosting properties, A world-class herb to use for treatment of depression. Impaired liver function, poor nutrition, and infection are all often root causes of depression, anxiety, and irritability...

Research coming from Japan has demonstrated it to be a powerful anti-histamine, making the herb useful for allergies--including food and drug allergies, anaphylactic shock, atopic dermatitis, hay fever, and hives.

Where are your shrooms from?
The source is most important. A ton of Ganoderma currently on the market is commercially grown, solvent extracted...and can even be the wrong species. You will not get the same benefits talked about above from a poor quality.

Many manufactureres simply grow mycelium, chop it up into powder and sell it. Medicinal Foods Full Spectrum Reishi is Hot H20 activvated and 95% of the non-gmo substrate is removed making it some of the most potent highest quality in the world. 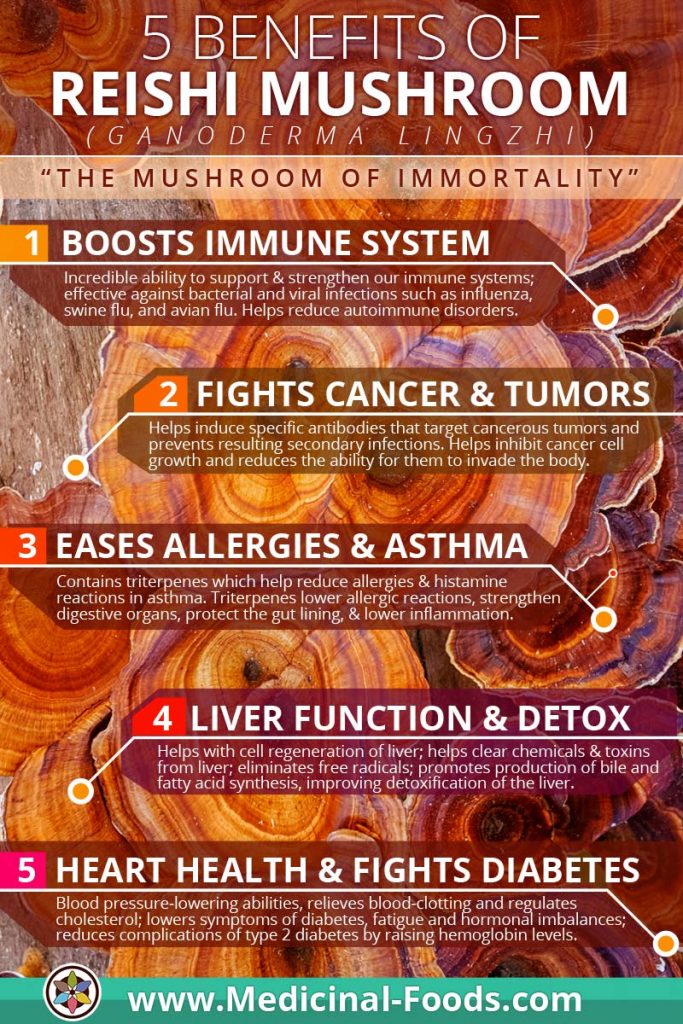 GanodermaReishi is the Japanese word 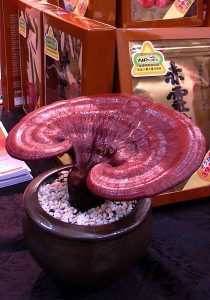 for a group of mushroom species that fall under the scientific name Ganoderma lucidum. The Chinese equivalent is ling zhi. This mushroom with the strange name has health benefits beyond the mundane...

Once thought to be a single species, recent studies have shown that there are actually more than 5 different kinds of Ganoderma mushroom; this resulted in them being labeled a “species complex,” which means they are considered different species despite having an extremely similar genetic makeup.

According to Paul Stamets, an advisor for the Program of Integrative Medicine at the University of Arizona Medical School, Tucson, “these species…have 98-100 percent commonality of DNA.” This means that even though they’re technically different strains, their forms and functions are practically identical, and their healing properties are the same.

Used in traditional Chinese medicine for thousands of years and have consistently been hailed as a “mushroom of immortality,” since it was understood that they help people live longer lives.

Although they grow naturally in China, Japan and North America, they tend to be extremely rare, which is likely why those that were found were exclusively consumed by nobility.

The ancient Chinese also believed that this shroom of immortality could restore equilibrium to the body by recalibrating its physical, emotional and energetic defenses against sickness, stress and fatigue.

These mushrooms were seen as a sort of natural panacea, or a cure-all, that could vastly improve human health.

Although these beliefs were developed millennia before modern medicine, there has been a significant amount of research done on this fungi, and it is clear that they truly do have an incredible amount of healing potential.

Aside from the baseline health benefits that Ganoderma offers us, its healing properties are effective against a multitude of very dangerous diseases, many of which are the most common diseases we’re susceptible to developing in this modern era. Here are some of the diseases Reishi can fight against.

May help prevent Cancer
This powerful natural remedy works wonders when coupled with chemotherapy and radiation treatment, sometimes boosting patients’ response to these treatments by 50%. It’s been known for many years that Reishi helps the immune system pinpoint and destroy cancer cells that may appear, but in 2012 new studies were conducted which showed that Ganoderma has more complex and efficient methods for fighting cancer than anyone had ever thought possible. This does not mean that it is a valid substitute for standard cancer treatment, but consuming these mushrooms can result in a patient needing far less chemotherapy drugs.

May help prevent Neurological degeneration
By increasing nerve growth and production, Ganoderma helps the brain develop stronger neurons at a more rapid pace and protects them against inflammation, which is what causes the neurons to degenerate after the initial stages of Parkinson’s disease.

THis Mushrooms of Immortality can also heal or even prevent the onset of Alzheimer’s disease by reducing the oxidative stress that proteins like Abeta can cause.

This is achieved through triterpenes and polysaccharides, which research has shown are among the most powerfulconstituents. They’re also capable of combating tumor growth, strengthening the immune system and reducing blood pressure.

May help control Obesity and diabetes

These two conditions are so often comorbid that many researchers have begun to refer to them as a single disease, called “diabesity.” This problem has become so severe in this modern age that it’s been categorized as an epidemic. Luckily, this shrooms of Immortality i may help the body combat both!

The triterpenes and polysaccharides in the fungi can stop the body from producing new fat cells and in turn can reduce the amount of fat being stored. They can also reduce cholesterol and trygliceride levels which lowers the risk of cardiovascular disease.

Blood sugar levels are also reduced by Reishi consumption, making it effective against diabetes, and may help prevent kidney disease.

The list of diseases that the shroom of Immortality can possibly combat is quite long and contains insomnia, viral infections such as influenza, stomach ulcers, hepatitis B, asthma, and even HIV/AIDS.

Are there any side effects?

As the spore, mycelium, begins to detoxify the body, people that have very sensitive bodies might experience one or more symptoms like upset stomach, dizziness or rashes, but these typically don’t last more than a few days.

However, these are not true side effects, and as a superior herb. This fungi ompletely non-toxic. If these symptoms do arise, you can take a vitamin C supplement to reduce the discomfort.

On the other hand, these shrooms can hinder the effects of immunosuppressive drugs, and there could be complications for people who have undergone organ transplants. If you’re unsure whether Reishi is safe for you to consume or not, talk with your doctor for more information.

Where can I find some?

You can get it from us, right on this website!

Learn more about our proprietary Reishi Mushroom powder in the shop.

“Mycelium” is one of the most potent parts of the mushroom, and these filaments have been ground into very fine powder along with all the beneficial parts. Each bag has 100 grams worth of Full-Spectrum reishi, or 50 servings, and you can add it to tea, food, or even add it to nut or grain milk to make a healthy smoothie!

I love Ganoderma Mushrooms!
These are some of my favorite additions to salad and all sorts of healthy foods. It’s also great because they are so versatile and they are a major medicinal food!

Staying mentally alert as well as active is top of mind for a lot of people, and including nutraceuticals (food that has health-enhancing benefits) as well as supplements. The beneficial effects of Reishi mushrooms or cordyceps on cognition are an important attribute to discuss-- and the research backs it up.

Recent experimental evidence shows that Reishi spore oils have a ‘neuroprotective effect’ on dopamine receptors/neurons in mice during clinical trials. This, in plain english, translates into possible protection from Parkinson’s disease for humans.

Other extraction forms of mushrooms like cordyceps also show neuro-protective qualities during clinical trials and has show that G. lucidum may also be effective in improving the function of mitochondria in aging rat brains. This suggests the possible therapeutic abilities against age related, neuro-degenerative diseases.

The Science behind Reishi's benefits 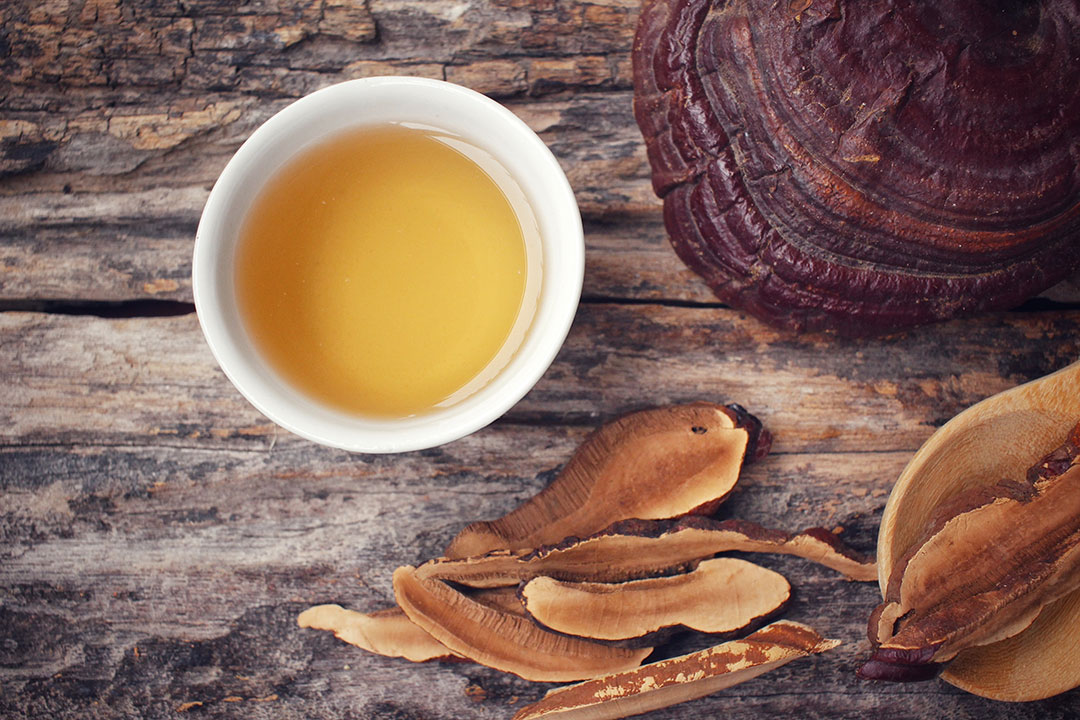 Researchers have identified that one of the most rewarding benefits of reishi is the presence of the beta-1 3-D-glucans, a type of polysaccharide. These water-soluble complex carbohydrates promote health by strengthening the immune system, lowering your blood pressure, and polysaccharides also have anti-tumor cancer fighting properties. Yes, you heard that right...

Possibly the most natural and potent organic medicines to build our immune systems on the face of the planet, but scientific studies have only deciphered benefits from 7% of the 140,000 fungi available on earth.

It has been found that Reishi Mushrooms induce specific antibodies that target cancerous tumors and prevent resulting secondary infections. Cancer is toxic on the body’s systems anyways, but secondary attacks from environmental pathogens can make the body more susceptible to ongoing issues.

Another study that was done shows that Reishi Mushrooms can actually help breast cancer patients by inhibiting cancer cell growth and reduce the ability for them to invade the body. It interrupts cell spheroids that are involved in the invasive nature of cancer cells. Research shows that whole mushroom reishi extract can significantly reduce cancer cell viability by 50%. Reishi mushrooms have also been shown to have the ability to cause a reaction called apoptosis - stopping cancer cells dead in their tracks.

Healthy cells eventually die, but certain cancer cells do not go through apoptosis and actually can continue to divide, endlessly. 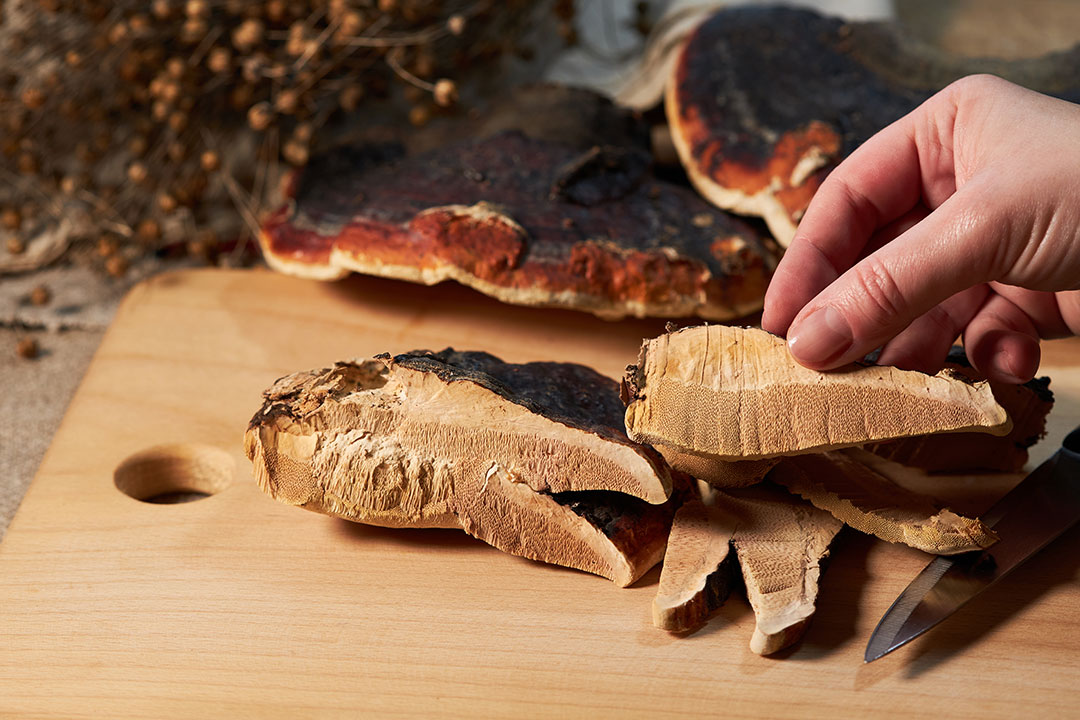 This cell division can cause more issues inside the body, but luckily, Reishi mushrooms intervene and assists in this process a great deal.

Shroom Supplements - How Can You Benefit From Them?

Now, be aware that these are only three ways that Reishi Mushrooms have proven to be effective in fighting the spread of cancerous cells. There are numerous studies that support other healing benefits from these amazing mushrooms...and you should consider adding them into your supplement regimen.

Great for liver detoxing and anti-stress.

Throughout history Traditional Chinese Medicine (also known as TCM) has recognized different colors valuable for different uses. While Red Reishi is by far the most common type of Ganoderma, there are other more rare and costly types of Reishi which have been highly valued for centuries by the doctors of (TCM).

Medicinal Foods™ Reishi Mushroom is Full Spectrum, with all the naturally occurring anti-bacterial, anti-viral, immune modulating, blood pressure regulating and all other valuable health giving properties that Ganoderma has been known for throughout its long history. 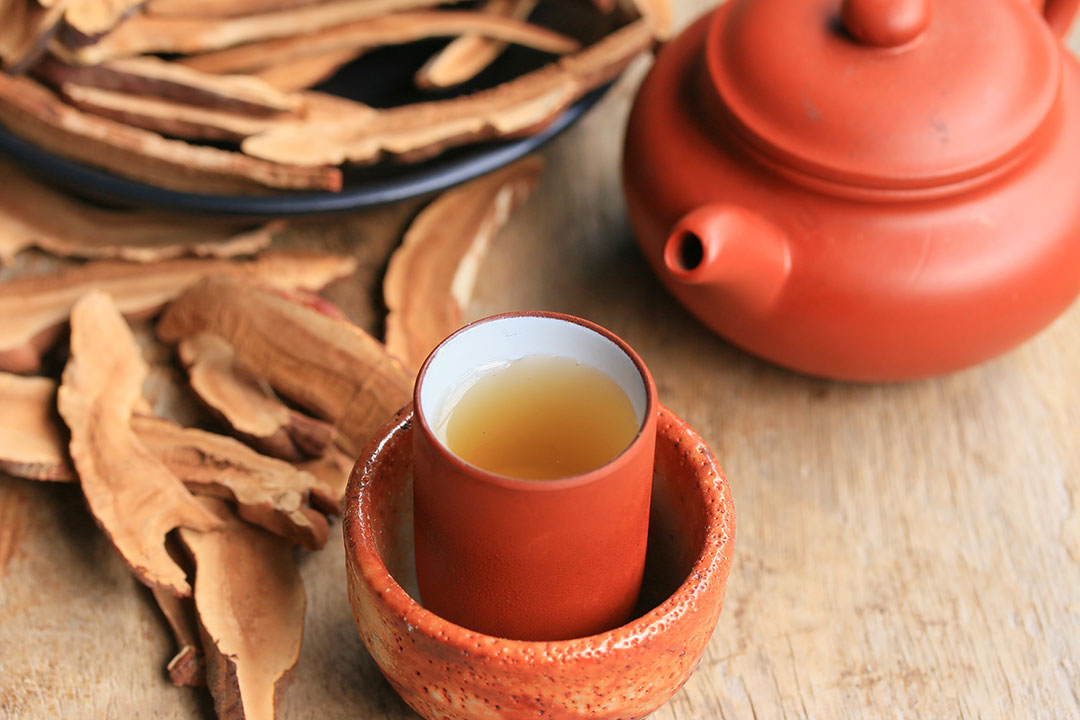 Never before in the history of mankind has there been any Full SpectrumReishi product this potent – or this valuable – and is now available below!

We use no fillers or flowing agents or any kind of preservatives – just pure Ganoderma, made with organic ingredients!

And like all our Fungi Products we proudly offer our No Questions Asked 100% Money Back Guarantee! Get your family started today for a happier and healthier future - at less than one dollar a day!