Satisfaction Guaranteed
If your are not completely satisfied with your purchase, simply contact us within 14 days for a full replacement or refund.

Rated 5.00 out of 5 based on 1 customer rating
(3 customer reviews)
Full Product Page
$52.8
96 servings ( $0.55 / serving )
Add to cart
Notify me automatically whenever this product goes on promotion:

Nano Silver is better than colloidal silver solutions: Now you get 2X the amount of 10ppm Micronized Nano Silver for almost 1/3 less cost!

You can even brush your teeth with this nano silver once-per week for optimal oral care, targeting the bad mouth bacteria that create an acidic environment.

Provides the Immune-boosting 50 micrograms of silver needed daily, but may not be available in the topsoil your food is grown in.

Silver Biotics is an amazing brand of colloidal silver that uses a multi-patented technology called SilverSol. Its unique solution administers nano particles into the body in a more advanced way that boosts its overall effectiveness for a multitude of health benefits.

Many claims are made about the use of colloidal silvers for general health. “Silverware” is a term popularly used today for forks, spoons and knives because in the past these utensils were actually made of silver. Silver has a natural anti-bacterial quality and so plates and other dishware was also made of it.

There have been many instances throughout history of numerous civilizations using silver to preserve food and kill off harmful bacterial.

Silver urns and pitchers were used to preserve wine, and in the middle ages silver coins were often placed at the bottom of milk jugs so that the milk wouldn’t spoil by slowing the growth of bacteria.

Today, many brands exist but the effectiveness of colloidal silver has sometimes come into question, namely the potential danger of accumulating too much silver in the body.

The product features SilverSol technology was created to improve upon other formulas and has been tested rigorously for safety and effectiveness; that's why we chose to offer it to our customers.

What makes this advanced form of colloidal silver unique is each nano-sized silver particle is coated in an AG4O4 molecule (4 Silver atoms and 4 Oxygen atoms) which helps bind the silver particle to the water molecules and thus becomes a part of the structure of the water. This has proven to be a more efficient way for the body to utilize and later eliminate the silver particles.

Immune support is one of the hallmark features of this amazing product and is one of the most common uses for colloidal silver in general. Firstly, it kills harmful bacteria, viruses and fungus within the body as well as in external environments.

When the silver nanoparticles come into contact with the harmful foreign substance, they bind to the microbial cell wall and eventually penetrate into the cell.

Once inside they bind to enzymes needed to metabolize energy, effectively shutting down its energy production. And lastly, the silver then attaches to the DNA strands of the microbe and shuts down its reproduction process.

In this way silver nanoparticles are able to neutralize the growth and reproduction of foreign viruses and bacteria in ways that antibiotics cannot.

It has been shown to be an effective treatment against the common cold and flu and the bacterial infections that typically come in tandem, such as a sore throat and even bronchitis.

In one particular study of one hundred children with a common cold, ninety percent experienced reduced inflammation when taking nano silvers while only sixty percent did who took a saline solution.

Other studies have been replicated with animals, all with consistent, positive results for reducing inflammation.

Advanced nano silver solutions such as this one have also been shown to treat even more serious viral infections, such as herpes, HIV/AIDS, and some cancers.

The benefits of nano silver products begins with the correcting of one concern made by skeptics: “If the silver molecules are killing bacterias throughout the body, then they are probably killing the good bacteria (probiotics) in our bodies too, right?”

After years of 3rd party testing and thousands of pages of documentation the answer is a solid ”No”. This product does not affect probiotics in our intestinal flora, but other forms of colloidal silver run the risk of destroying other helpful bacterias in our body.

SilverSol technology-based products are also more stable, so the silver can undergo more drastic changes in temperature and not lose any of its capabilities. They also leave the body after 24 hours, so there is no threat of accumulation in the body or the skin condition Argyria.

We carry this patented formula in a 16 oz. bottle. We also recommend brushing your teeth once a week with it to kill the harmful bacteria in our mouths that naturally accumulate; and also on the skin.

One serving size is 50 micrograms of silver, which is the recommended serving size the body needs daily to fight off bacterial and viral infections. There is also an extra strength version.

While the uses and benefits of silver have been known for centuries, there is still a plethora of contesting information online as to whether colloidal silvers and nano silvers actually provide the claimed benefits.

Some sites say that the benefits only occur in laboratory petri dishes, and the aforementioned skin condition Argyria can become a serous side effect. Argyria occurs when a drastic over-consumption of silver can turn the skin a grayish blue color, although no other effects to the body’s functioning have been noted in these cases.

This rare condition was popularized in the late 1990s when a man with this condition appeared on television that was used to effectively scare potential buyers from purchasing the then existing formulas of colloidal silver.

But it was revealed that the man took a silver solution as eye drops repeatedly, which is not the recommended method for taking it daily, and his condition only occurred after many years. The silver had accumulated in his body, but this nano silver product circumvents this problem through the AR4O4 molecule that more effectively binds to water and so exits the body quickly.

In fact, no studies show that serious side effects occur with taking this supplement, and many people take it orally every day for years and report not catching the common cold or flu, or when they do it is very mild and the body is able to overcome it very quickly.

SilverSol nano silver products have also undergone millions of dollars of scientific testing in FDA approved 3rd-party labs to ensure the efficacy of the health benefits. And after all the experiments and volunteer human tests, as well as years of selling their products on the open market, no harmful side effects were reported whatsoever.

SilverSol technology has brought the ancient bacterial treatment of using silver into an entirely new paradigm. It is far more safe and effective than all other forms of colloidal silver, and can be taken as a daily immune boosting supplement without any risk of serious side effects. There is also a toothpaste product with these qualities. 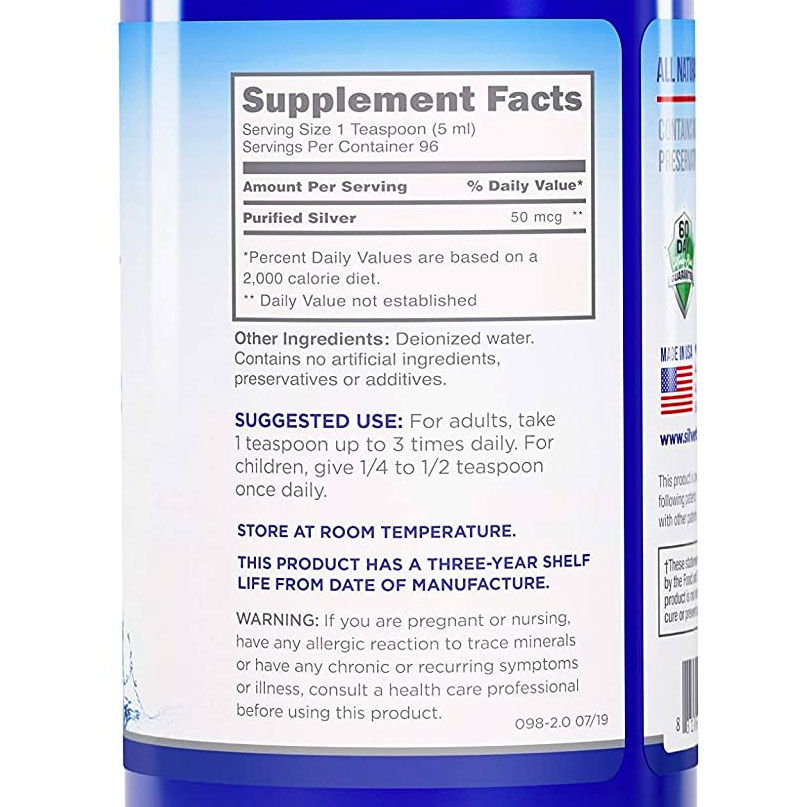 Immunity is my superpower. Because it wasn’t always that way. I’ve spent a lifetime building it. Here’s what I take- my “precious” and more... My simple Immune Boosting regimen with Nano Silver (not colloidal) and more! All about why I love this stuff!

This is everything I took when I recently travelled to Los Angeles to give a talk on Invincible Immunity. There were sick people there and when I returned as well. It helped me weather the Storm unscathed and in great health!

Throughout the centuries and into today, silver in various forms has been used to benefit mankind.

Silver in the good ol' days: 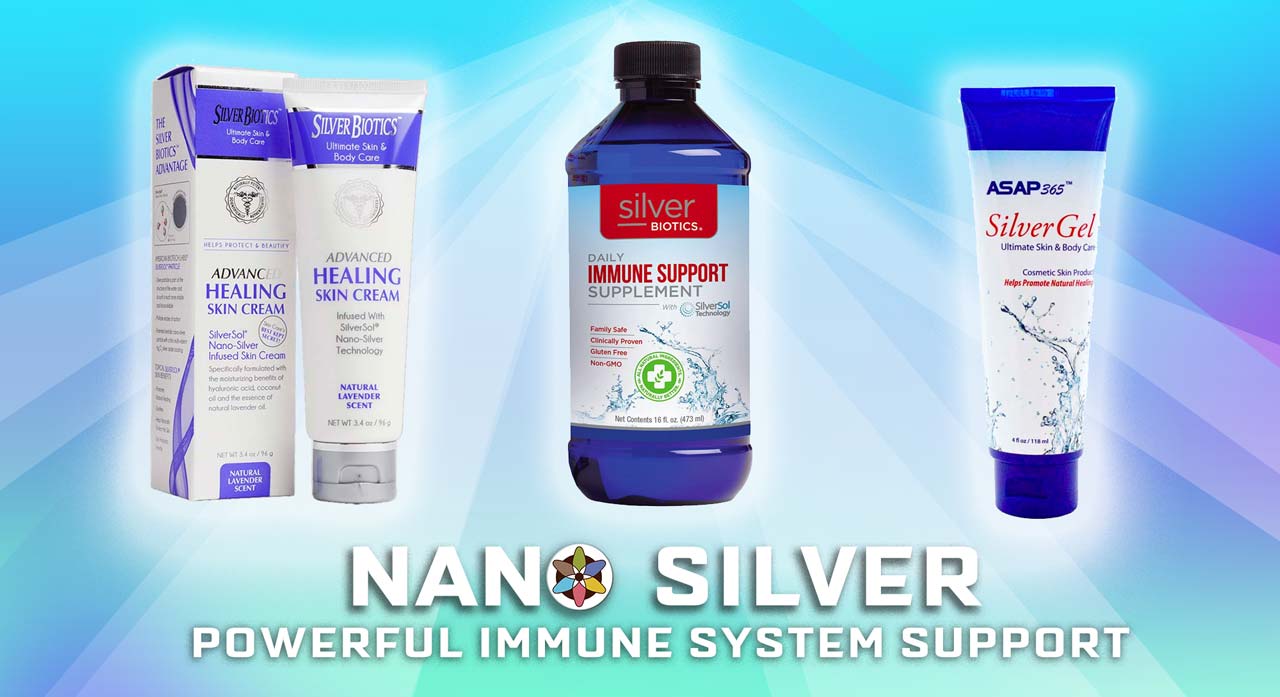 The first line of defense with powerful Nano Silver Products to support a healthy immune system.

Modern science now explains why these ancient practices were effective; it also shows that even in modern-times, silver has many uses that may support our healthy well-being.

Does Nano Silver Harm Helpful Bacteria in the Intestines?

Enveloped in a water molecule, this nano silver goes to every nook and cranny in the body, killing pathogens.

This is an important question because some products can wipe out friendly bacteria that inhabit our large intestines.

These friendly bacteria not only produce B vitamins and folic acid, but they support healthy immune function.

The New Silver Solution® does not present such a problem.

Independent studies both at Brigham Young University and Viridis Biopharma have effectively shown this.

In vitro testing of the silver on a number of friendly fauna, such as lactobacillus, have shown that the silver does not kill these helpful, probiotic bacteria.

These safe but powerful clear hydrogels have direct claims against bacteria, yeast, and fungus.

Fight MRSA infections: works even against bacteria like MRSA and VRE etc. etc., also yeast and fungus like Candida albicans and Aspergillus niger.

For the clinical data on which pathogens are killed at which parts per million read here:

Candida is top of the list at 10 ppm. Most other pathogens you and your family are at risk of daily are around 3 ppm.

Why should you always keep Nano Silver on hand?

The Silver Solution provides a first line of defense to protect our bodies against pathogens that are killing millions of people throughout the world annually.

The Silver Solution is an immune-modulator, meaning that it may help a healthy immune system to fight off disease!

Although many thousands of people have benefited from our products and traditional healers have used the ingredients in our products for millennia, we are required to inform you that: Statements regarding the health benefits of this product have not been evaluated by the Food and Drug Administration. This product is not intended to diagnose, treat, cure or prevent any disease. If you are pregnant, nursing, taking medication, or have a medical condition, consult your physician before using this product.

FREE 20-min consultation with Medicinal Foods founder. Meet with Sky Kubby to talk about your wellness goals, intentions, or ask questions about products! Shop Now
Back to Top 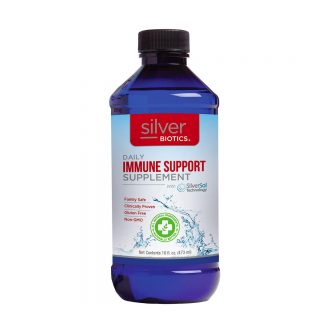